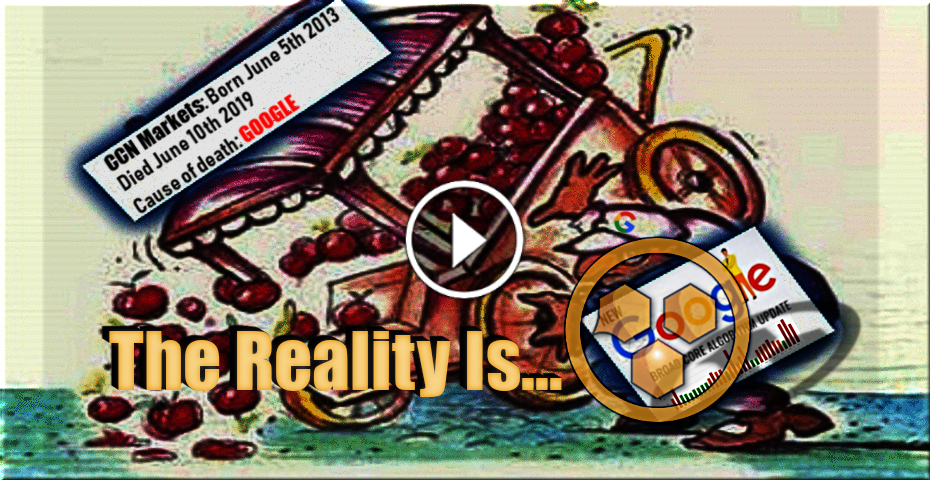 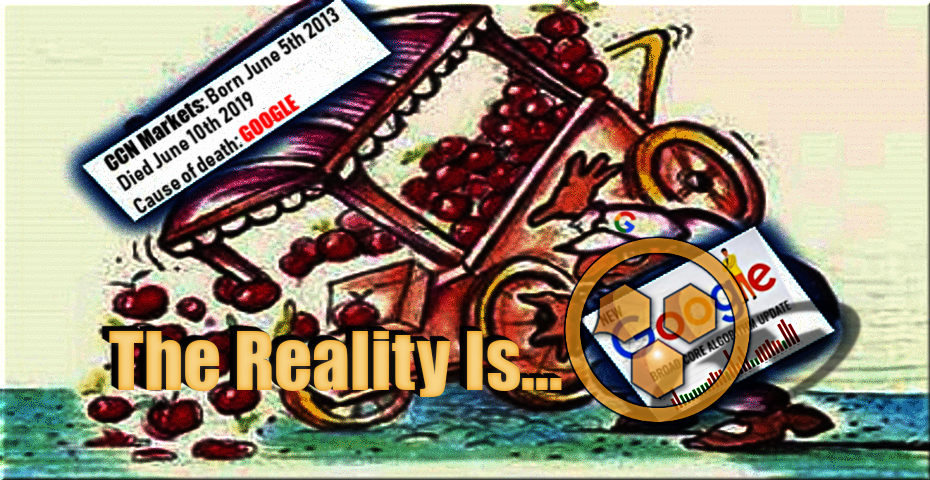 While Google frequently rolls out updates to its core algorithm, they rarely announce it. On June 2nd, 2019, they announced a broad core algorithm update resulting in some devastating ranking effects for some sites particularly news sites. CCN, a cryptocurrency news site, recently published their thoughts and disdain for the changes that saw its traffic from Google Searches plummet by more than 71% on mobile overnight, causing CCN to announce their closure after 6 years of exceptional growth.

Among many others, Cointelegraph, a high ranking news site, and also the leader in Blockchain news, Coindesk has also experienced a drop of 21.1% and 34.6% respectively according to Sistrix.com. Is this targeted at Crypto Sites from the Titans? It certainly looks like it, however, statistics show that many other sites that are not affiliated with cryptocurrency such as Dailymail.uk, among many others have also taken a hit.

What are Google Updates?

Google perpetually make minor changes to the algorithm every year, however, the major core updates are integral to the ranking algorithm and consequently cause prominent alterations in Google’s search outcomes and Alexa Rankings.

Theoretically, the prime reason for these core updates is to convert the configuration of search algorithms from humans to what to Artificial Intelligence or in Google’s case Machine Learning is more relevant. The person still inputs the data and the computer learns from it thereby creating computer-generated algorithms.

Notably, the media sites that resulted in a negative change to their rankings seem to be contingent on formulated and invasive advertising.

Your Money Or Your Life – [YMYL]

There are numerous categories outlined in Google’s Search Quality Rating Guide.  News articles or public/official information pages important for having an informed citizenry is just one and it pertains to webpages that include information about local/state/national government processes, policies, people, and laws; disaster response services; government programs and social services; news about important topics such as international events, business, politics, science, and technology; etc. Keep in mind that not all news articles are necessarily considered YMYL.

In CCN’s case, there has been conjecture the “YMYL” has been an instrument in the results of the recent Google update,   Nikolaj Antonov, a Silver Product Expert from the Google Webmasters Forum, wrote to CCN:

“Your website is the news website with articles focusing on the financial market. Perhaps Google can be ranked the website as Your Money Or Your Life – YMYL and the content and trustworthiness level of the website is defined by the recommendations Expertise, Authoritativeness, Trustworthiness – EAT.”

The responses received from queries by the affected sites were website layout, and the advertisements shown on the sites as having “clickbait titles”. However, Google or its Support has confirmed that they don’t even fully know how Google’s RankBrain works. It needs to be addressed and explained by someone who actually worked on the June ‘19 Core Update. All anyone else can do is speculate.

What Is The Reality

Many if not all of these sites depend totally on SEO in their business so unless they find out and address the issues that may be causing the drops and lower ranking, they may well continue to lose traction. This is where a hybrid Market Network can take the reign and run with it. It’s new technology mixed with traditional Inbound Marketing, Commerce, Social Networking, and Digital Media that is not reliant on Google search engines or any other for that matter. SEO is a secondary consideration.

Markethive.com, The Ecosystem For Entrepreneurs, is not dependent on Search Engines. It builds its own society and its traffic is contingent to the Markethive membership driving more traffic in, due to the nature of its platform, what it has to offer, the viral aspect and rewards system in place. Just one of the attractions is that Markethive is not dependent upon Google.

Markethive has built a system on the Blockchain to empower the Entrepreneur, offering privacy, freedom of speech and importantly, autonomy.  Markethive has amazing valuable Inbound Marketing systems, integrated within a Social Network with multiple Commerce portals and a Digital Media Platform offering Press Releases and Sponsored Articles to its members. All of this on a blockchain foundation, which above all the other benefits, allows Markethive to pay its members to engage on the platform, regardless if free or upgraded Entrepreneurs.

Markethive has been in Beta for the last 4 years while implementing state of the art technology. In fact, it is still in Beta albeit up and running with its own crypto coin [MHV] already listed on its first exchange. Airdrops and Micropayments [faucets] have commenced and members are now enjoying the fruits of their labors. Markethive is currently sitting at 26,347 on the Alexa Ranking at the time of writing and improving rapidly. Markethive will launch its public crowdfunding launch in about 2 months.

“In building Markethive it was always my intention to make Markethive everywhere but nowhere and with the Blockchain, makes it even more so. When we build our decentralized hives on D Wave computers, then each hive will represent 200 million parallel universes to the millionth power, and with thousands of those, we’ll be armed and Markethive will be a force to be reckoned with.”

Markethive with its numerous plugins, different domains, layouts, content, etc, all feeding from Markethive but feeding into them, makes it a total disassociation. We could literally have hundreds of thousands of websites all interconnected inside through the Blockchain from the outside having no possible connection, each one producing its own unique content. Some can be ranking really high, others not so much, but all feeding back into Markethive.

The Google updates, in fact, anything they do that may disrupt other sites and their standing in SEO will not affect Markethive. You could say it’s like trying to kill the Hydra.

Markethive is focused on providing a Universal type of income for aspiring entrepreneurs. We believe sharing our resources with you as you build your business and seek to reach your goals, benefits all.

We welcome all to our collaborative world of the Entrepreneur, the Markethive, built for you, by you and with you.

Market Manager for Markethive, a global Market Network, and Writer for the Crypto/Blockchain Industry. Also a strong advocate for technology, progress, and freedom of speech.  I embrace "Change" with a passion and my purpose in life is to help people understand, accept and move forward with enthusiasm to achieve their goals.

ASX-Listed DigitalX Seeds New Fund With Half Its Bitcoin Holdings

ASX-Listed DigitalX Seeds New Fund With Half Its Bitcoin Holdings                                          The first ever cryptocurrency firm to be listed on a major stock exchange has launched a new bitcoin fund. DigitalX, which debuted on the Australian Securities Exchange (ASX) under its previous name DigitalBTC as far back as 2015, announced the new fund […]

Iran Is Being Targeted for Economic Independence Not Terrorism